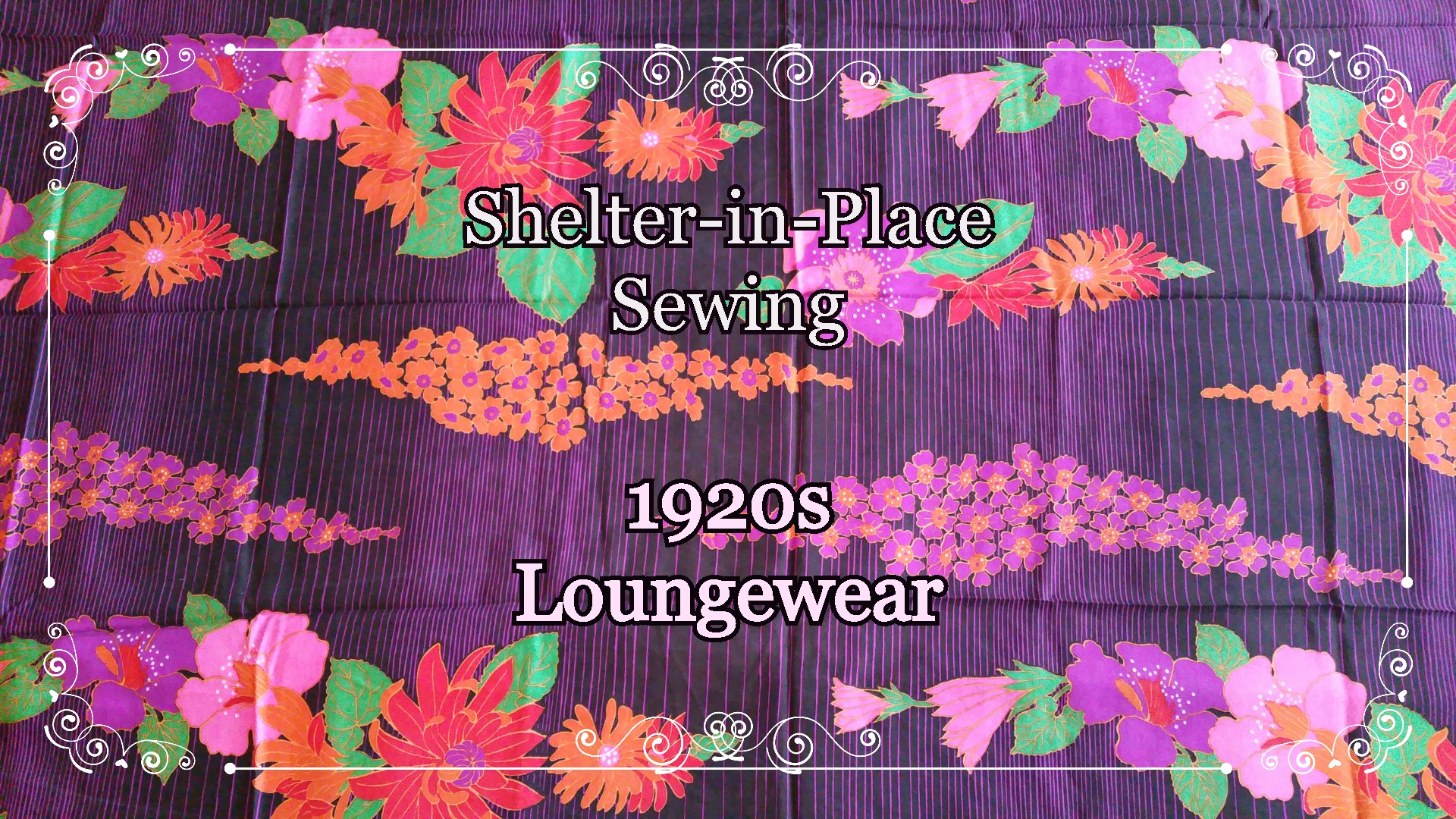 We may earn money or products from the companies mentioned in this post.

Anyone else been tempted by those loungewear adds popping up everywhere? The past weeks have definitely been THE time to wear one’s lounge-ables! While I am still eying a few pairs of joggers, the adds got me thinking. My first thought was “I should make my own loungewear…” My next several thoughts considered pattern options, project blogability, and my current state of laziness. Thoughts wandered through the circuitous routes of my brain, until I casually recollected that 1920s posts are favorites on the blog. Wait- light bulb! Could I make loungewear… but from the 20s?!?!

I sifted through my 1920s pinterest board and discovered this period “negligee” pattern, graciously posted by The Midvale Cottage blog (found here). The directions described how to draft one’s own pattern for making “This graceful garment that saves time as well as cloth.” Interestingly, the pattern was very similar to a 1970s caftan that I made ages ago. The only real differences in the 1920s pattern was a midi instead of maxi length and the drop waist position of the belt.

Miraculously, I found the perfect piece of fabric in my save-for-a-special-project-because-I-don’t-know-what-to-do-with-it fabric stash! (Shelter-in-place has got me diggin’ deep, Guys!) The fabric was plenty long and the was the width called for in the pattern!! It might be silk; it probably originated in the 1970s; and it may have come from Hawaii. All I know is that I loooove it!

More miracles- I also had black seam binding for the neck and ribbon in the perfect color for the belt! This project is meant to be!

I dove into the pattern’s brief instructions. Although a simple design, the process took me longer than planned, as there was a lot of slippery fabric to work with! Speaking of fabric, I first folded the fabric in half longways. (The fold is on the left in the photo.) That fold would become the shoulders of the dress. The finished edges of the fabric would be left un-hemmed and flowy.

After folding the fabric in half again to find the center of the shoulder fold, I sketched out my neck hole. (A t-shirt helped me get started.) The pattern reminded me to cut more from the front of the neck than the back (which required some unfolding and finagling).

After I cut the neckline, I was able to “try on” the fabric check the length. I measured and cut that amount from the bottom. I was initially going to make this maxi length, but I realized from the picture that a midi length would be more 1920s.

The next step was to hem the bottom of the dress. I used about two inches and rolled that hem into place.

Here are my (hard to see) chalk marks and pins for the side seams before I sewed ’em in place.

With the side seams done, it was time to make a home for the belt. I didn’t quite understand the pattern directions at this point, so I went rouge. I made markings next to the side seams at slightly below my hip level. I then used my sewing machine’s buttonhole foot to make holes big enough for the ribbon belt to fit through.

And just when you realized the quick-and-easy pattern has taken several hours, you remember the neckline… This is a job for single-fold bias tape- buh buh b-BUH!

Since I had cut off extra fabric from the hem (twice), I had enough to make a headscarf!

Here is the resulting scarf-tube, before it was turned right-side-out. Hey, 1920s ladies needed their accessories, even when lounging! (Just look at the pattern picture! She’s wearing jewelry and VERY cute slippers!)

Upon completion, I took my 1920s loungewear… nowhere.

Inspired by the pattern picture, I gussied things up with vintage beads, finger waved hair (like in this post), and some 1920s makeup (great tutorial here)! Nothing like being comfortable AND looking snazzy!

The negligee/caftan proved to be super comfortable! I am already planning to make more… eventually. Right now, I’m busy lounging.

Hope you all are doing well and can make time for some lounging! I highly recommend it, especially if you do it with vintage flair!