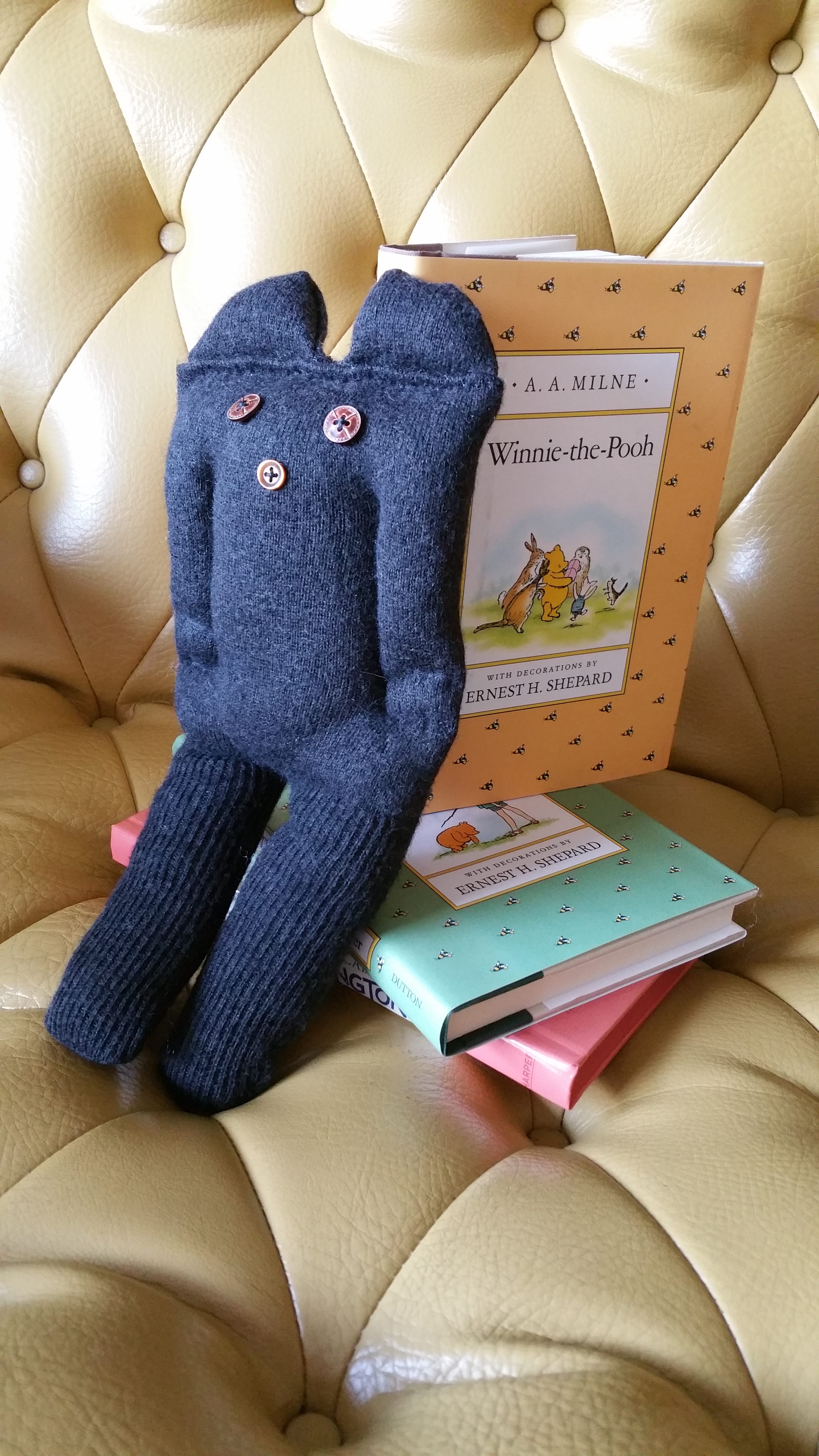 I have been hoarding old wool sweaters ever since discovering the many uses for shrunken, “felted” sweater fabric! One of my favorite uses for the softest remnants are stuffed animals! 🙂 The very idea thrills my inner kid, and since I have some youngin’s on my Christmas list, I got to stitchin’!

I love using sleeves for stuffies, since the sleeves are usually left over after bigger projects (like the sweater pillows in the last post!). The tube shape of the sleeve also provides you with part of the shape for the creature. For this project, I started off with the tapered arm of a once-loved-and-accidentally-shrunk cashmere sweater. (It’s ok, it came from Goodwill in the first place, and will now have a new life!)

As you can see in the picture, I used the tapered cuff of the sleeve for what will be legs. I first turned the sleeve inside out. Then, I folded the sleeve in half and pinned it, cut down the center fold, curved the “feet” ends, and pinned the “legs” closed for sewing.

Next, it was time to sew! I experimented with my sewing machine to see which stitch and stitch size allowed the seams to lay the flattest. I used a zig zag stitch and needles for knit fabric. After sewing, I turned the fabric right side out to create legs!

Time for some stuffing!

After stuffing the legs and body, I rolled the raw edges of the body to the inside and pinned.

Now to turn our attention briefly to the topic of ears. See how I had only used part of the sleeve to make the body? I used some of the remaining upper arm section of the sleeve to make the ears. I measured off 2 inches using a ruler and fabric chalk. Starting at the mid point of that section, I drew one ear shape with the chalk. This ear, once cut out, was then the template for the other. I cut the ears out, pinned ’em closed at the curves, and stitched the curves closed. I left the straight edge open for stuffing.

I stitched and then turned the ears right side out. After adding in a little bit of stuffing, and it was time to attach the ears to the body! I inserted the un-stitched opening of the ears into the opening of the body (the part where we had rolled the edges and pinned.) Once the ears were sandwiched between the edges of the body, I pinned the sandwich in place.

I hand-stitched the opening closed and was left with most of the body of a bear! He just needed some detailing…

Using chalk, I marked out mirrored “L” shapes at the bear’s sides. I hand stitched through the bear’s body along these “L’s,” pulling the thread tight so that the stitched lines created the indented outlines of arms. (I later added a bit more length to the “L’s,” which resulted in the look of square hands at the end of the arms.)

The last step was selecting and stitching on buttons for a face! I christened the newly-made stuffie “Bearly” and set him to work reading bear stories! 🙂 He seemed right at home.

Soon after, I made Bearly a bunny friend with a very similar design. (The main difference was longer ears.) Funny Bunny joined the sweater stuffie ranks and will soon be accompanied by sweater kitties! Stay tuned!