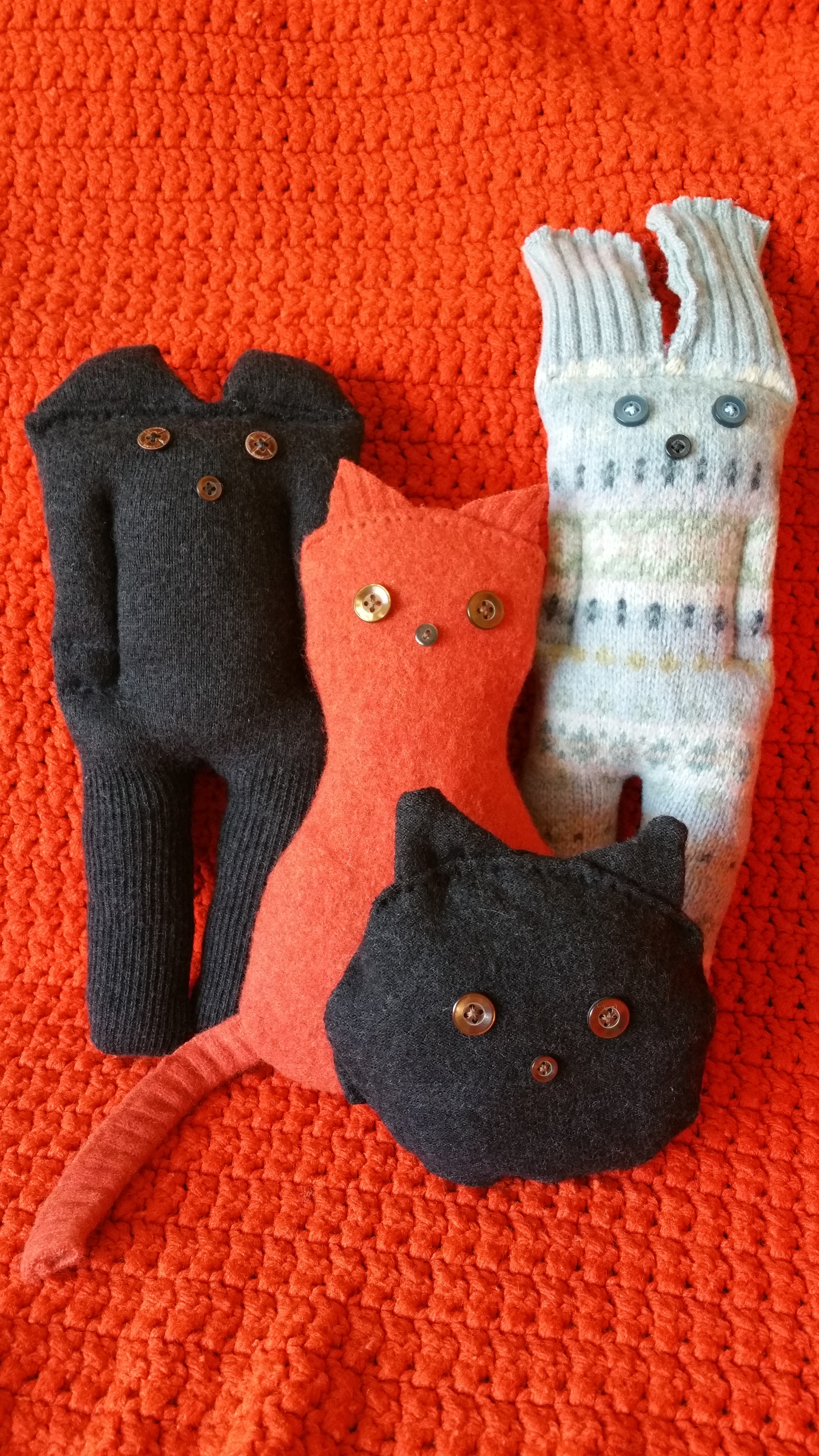 I’m loving these sweater stuffies so much, that I just had to make more! (Check out my first bear and bunny project here!) This time, I experimented with ways to simplify the design so that sewing was minimized but cuteness was maximized. What animal takes cuteness and fuzziness to the max? Lil’ stuffed kitties, of course! 🙂

My first design was basically a circle-shaped pillow with ears and a tail. I used more of the cashmere sweater remnants that I had used in the last post. I traced a bowl to create circles, then sketched out a pattern for ears and a tail. After cutting out two circles, two ear patterns, and one tail, I was ready for pinning and sewing!

First, I stitched the tail piece into a tube and turned it right-side-out.

With the pieces pinned, it was time for sewing! I first used scraps of sweater to test which size of zig-zag stitch worked the best on the fabric. Next, I stitched the pointed parts of the ears together, leaving the bottom edges open.

I then stitched around the circle of the body, leaving an ear-sized gap open.

Hooray! Time to turn the pieces right-side-out, admire the tail we had created, and get to stuffing!

Time for some detailing! I folded the tail onto the back of the body and top-stitched it into place. Then, I added adorable buttons on the front for a face! I christened the kitty “Meow Cat”! 🙂

Now for one more cat design! I started by cutting out two bowling pin-like body pieces. Then I cut one ear and one tail piece from the ribbed bottom and cuffs of the sweater. Since the ribbed sections were thick and stiff enough on their own, I didn’t have to cut two of each piece and stitch them together. The ears and tail were thick enough as one layer.

I pinned the two body pieces together, inserting the tail piece into the cat’s body and pinning it into the seam area (just like I did for the first cat). I left a gap in the pins at the top of the “head.” Since this was a new thickness of sweater fabric, I experimented with stitch size before sewing up the body.

I sewed up the body leaving the opening at the top of the head. I made a few tiny snips in the seam allowance to help the curved seams lay flatter when the body was turned right-side-out.

After turning the body right-side-out, I added stuffing!

Next, I rolled under the open edges of the head and pinned. I inserted the ears into the gap and sandwiched all the pieces together. The layers were pretty thick, so I pinned them as well as I could. I also pinched the pieces in place while I hand stitched everything closed.

After adding buttons for a face, we had a kitty! Introducing “Orange Cat”!

Of course, Bearly Bear and Funny Bunny from our last post welcomed the new arrivals! The stuffies are besties already! 🙂 Huggable, fuzzy adorableness is ready just in time for the holidays!