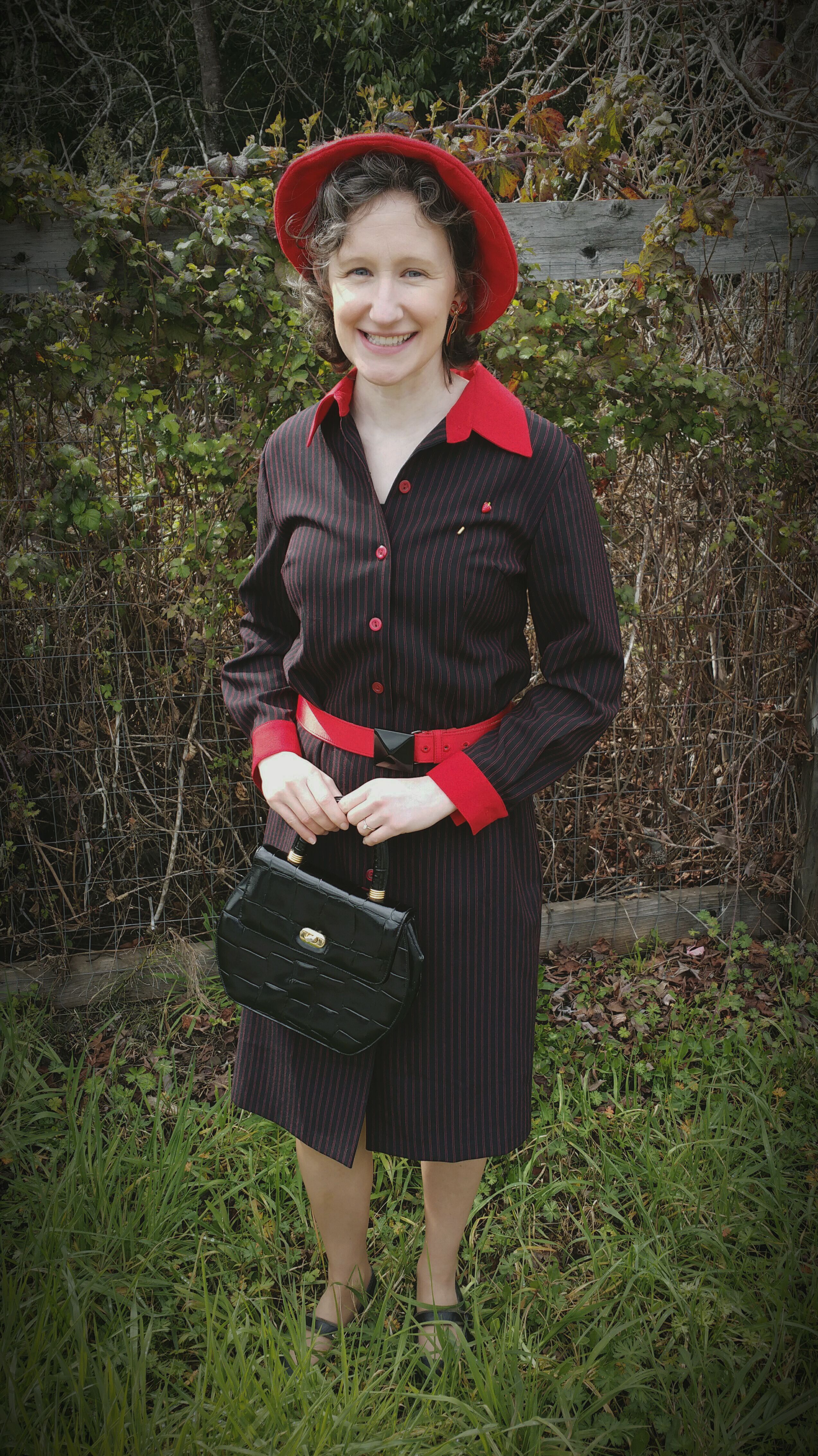 While scrolling through Pinterest, I became intrigued by pictures of vintage patterns. Many of these patterns had been originally published in old periodicals but were recently scanned and posted online! I decided to try some of these patterns to see if I could follow them and possibly created authentic period hats! I primarily focused on free patterns, although updated patterns are available on Etsy and are much less challenging!

The first pattern I tried came from https://vintagepatternsdazespast.wordpress.com/2014/06/19/vintage-hat-patterns-over-the-top-toppers-fascinators-head-pieces/ . I’m guessing that the pattern dates from the late 1930’s to early 1940’s. Although there were sadly no directions, the pattern looked simple enough. I began by printing out the image.

The picture of the finished hat showed a crown with a pronounced sloping peak. I taped my pattern piece together according to the pictures to estimate the shape of the finished crown. Thanks to my tape and paper mock-up, I decided against the original slope of the crown. To help lower and round out that peak, I folded the crown pattern into roughly the shape it would be when sewn. I then traced a more rounded shape in pencil before cutting it out.

Here is the modified crown pattern when unfolded.

I taped the modified pattern together (again!) to see what half of the finished crown would look like. I liked this shape much better! (The hat size could be measured at this point if full sized paper pieces were taped together and “tried on” like a hat.)

I correctly guessed that the pattern pieces should have their centers aligned on folded fabric. Keeping this in mind, I cut out 2 of each pattern piece on red felt.

Time for sewing! I first pinned and sewed the brim pieces into circles.

Next, I pinned the brims right sides together and stitched around the outed edges. After turning the brim right side out, I gently ironed the seam flatter. Voila!

I then pinned and basted the inner edge of the brim closed for reinforcement, although this is optional. Next, it was time to work on to the crowns! I pinned each crown together as shown in the pattern picture and sewed.

I snipped the seam allowances slightly, as shown in the pattern picture, to allow the fabric to curve. I did this on both the crowns and the brim.

The second crown piece became the lining of the hat. I inserted it into the existing crown with wrong sides together. The seam joining the crown/brim got tucked under the lining. The raw edge of the lining was also tucked underneath. Once pinned, I hand stitched the lining in place.

Here is the finished hat! I like the modified slope of the crown, which to me looks more 1940’s. In future, I would like to try using wool felt to create a more finished look. An iron-on interfacing, such as Pellon, could help create additional rigidity.

I wore my hat with a thrifted dress that was probably from the 1990’s. The perfectly matching belt was a providential thrift store find. Vintage jewelry, vintage bag, and old Clark’s shoes completed the look.

You may recognize an early hat prototype from this post!